To honor the final year of my thirties as well as the recent publication of my constraint-based Faulkner-inspired memoir, AS I STAND LIVING, which chronicles the year I became a father, I’m going to document my various sources of media input each week: art, literature, music, movies, television, and so on. New updates every week until I turn forty (March 19, 2018). 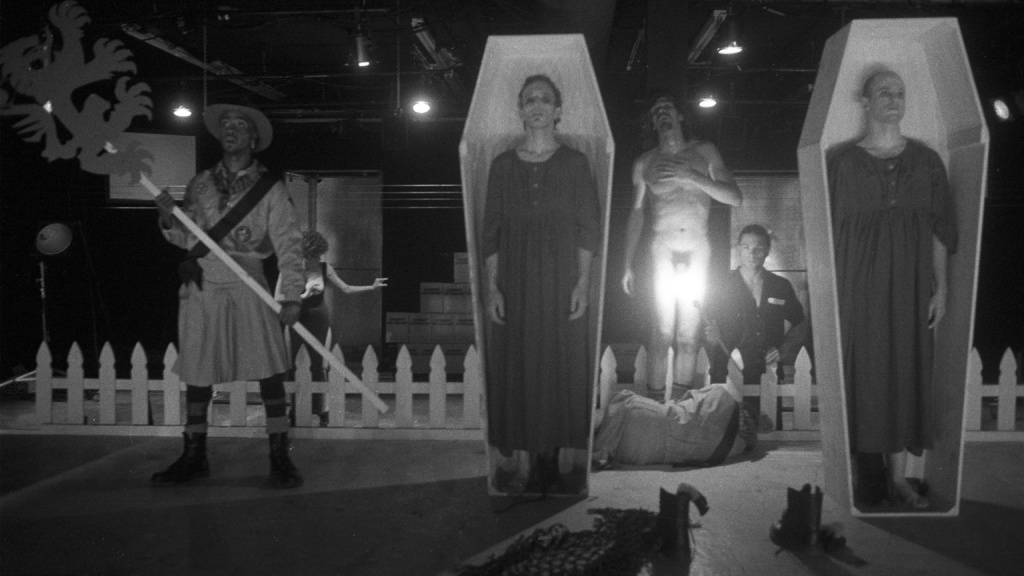 A handful of Reza Abdoh’s pieces (including Bogeyman) to watch here.

A super cool Amoeba Records employee told me about Mary Halvorson in context of her being one of Anthony Braxton’s students. He also gave me the names of a bunch of other Braxton students to look out for.

And then this ecstatic trio of Halvorson on guitar and Weasel Walter on drums and Peter Evans composing and playing horns at Death By Audio, Brooklyn (Dec 9 2012)

And then Halvorson playing this mind-melting duet with Susan Alcorn on pedal steel guitar at The Stone, NYC (August 7, 2016)

“Alienation is not born of production and exchange, nor of property, but of usage: the moment labor has a goal, an aim, a program set out in advance in a code—even if this is by the producer’s choice—the producer becomes a stranger to what he produces. He becomes a tool of production, itself an instrument of usage and exchange, until it is pulverized as they are.” (pg. 134, Jacques Attali, Noise: The Political Economy of Music)

Emma Sulkowicz’s ‘The Ship Is Sinking.’ Photo by Leila Ettachfini

New essay by Molly Sauter called “The Apophenic Machine: The conspiratorial mode and the internet’s data hoard were made for each other”:

The conspiratorial mode is defined by such an overabundance of meaning-making. Apophenic instincts run rampant, absorbing all data into the system of explanation. As Keeley notes, “Conspiracy theories always explain more than competing theories, because by invoking a conspiracy, they can explain both the data of the received account and the errant data that the received theory fails to explain.” That is, conspiracy theories take the apparent virtues of unified explanation and explanatory reach and pervert them. Absence of evidence becomes in itself evidence to be mined.

One hour podcast: “Gordon Lish and Eric Newby on pushing boundaries and doing what you love”

“The woman. The devourer. The Other. The Medusa. The scheming fatale. The succubus. The giver of all life. The mother. The whore. The crone. The virgin. The Madonna. The working mother, the single mother. The divorceé, the widow. The murderess. The actress. The sorceress. The lioness. She who writes in white ink.” — from the opening of “Body Manifesto in Five Acts” by Katharine Coldiron.

So pleased David made runner-up on Dancing with the Stars.

Glad Nina got the boot on Drag Race; while she provided a good heap of drama, the negativity got old fast. Trinity did good, but I think Sasha should’ve won.

Twin Peaks is back!!! OMG!!! How surreal. When the original series first aired I was in sixth and seventh grade and I watched it religiously. Talking with Caitlin about it, I realized how impactful it was on the formation of my personal aesthetic. So much to say about this beautiful masterpiece…I’m gonna have to make it into a full-blown essay. Suffice to say here: I cannot exaggerate my excitement and enthusiasm: it’s so far off the charts.

One last clip from another  recommended student of Braxton’s named Heather Leigh performing live with the legendary Peter Brotzmann at Islington Mill (March 31, 2016)