It’s an overcast, yet balmy day and the wife and I are taking our infant son for a float in the motel pool. I’m fighting a losing battle to prevent my son from drinking all the pool water when a 10-year-old boy swims up to my wife and points to our son’s floaty.

“May I say that that’s the finest boat I have ever laid eyes upon,” he says.

“Thank you,” my wife says, for lack of a better response. We alternately swim and float to the deeper end of the pool, but we soon find that our young socialite is following us.

“Madam,” he says. “You must teach him etiquette,” he says as he looks at my squinting son.

“We make sure to teach him manners–”

“Etiquette is so much more than manners,” he interrupts. “Without etiquette the system breaks down, and without the system there is no us,” he says. “I learned that from a book. I don’t get along with my friends because they’d rather watch Adventure Time than read.”

I assure him that his friends don’t know what they’re missing as his mother yells at him to leave us alone and he swims away.

But how important is etiquette? And, as a parent, am I doing enough to instill a proper sense of manners and etiquette in my son? Because I’m the bookish sort of person that I am, I feel it’s best to look towards books to address these core social systems and customs, and I want to be sure to share books with my child which help to inculcate the importance of getting along with adults and peers alike.

Let’s take a look at a few recent titles I’ve read to my family and see which ones pass the etiquette test. 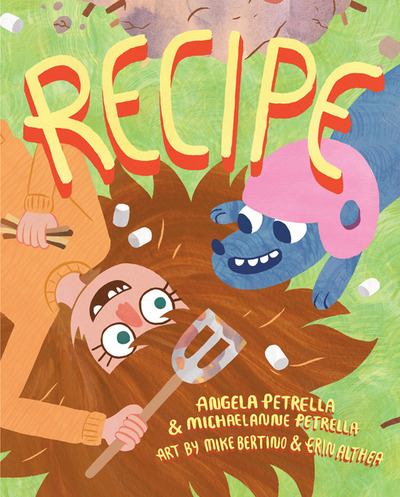 The precocious child tends to be a common theme throughout picture books and Recipe is no exception. Kristen, the wild-eyed little girl in this book, tells her mother to follow a recipe of the little girl’s invention because “[she’s] the boss when it’s [her] turn, if [she] asks nicely.” The gap-toothed firecracker quickly lays waste to the house as she instructs her mother to boil a bag of marshmallows and hotdogs and insert burnt french fries “one at a time” into the hillock. Only to leave the whole “recipe pile” out for the raccoons.

Throughout the adventure, Mother, “who is also known as Mom,” has an occasionally chagrined look upon her face as her dishes are broken and her kitchen is filled with billowing clouds of black smoke, but overall, Bertino and Alther render her with a proud smile across her face. It’s easy to take Kristen as a bratty know-it-all, but she’s a bratty know-it-all who knows what boundaries to cross and what boundaries to leave untested. It may be a bit of a subtle difference to young readers, but like the mother in Recipe, a caring parent can easily guide their child through this book and have a little fun while they’re at it.

TOON Books is a wonderful publisher that releases comic books geared towards beginning readers (they even print each books lexile level on the inside cover). Stinky features the eponymous monster who lives in a gross swamp. He feels threatened when a boy–perceived to be sweet and clean–comes to play in his swamp. It’s only after Stinky puts his prejudices aside and asks for forgiveness that he realizes that he and the kid have a lot more in common than he originally thought. This book is really fun, albeit gross (it’s replete with pickled onions and a toad named Wartbelly), and its message of tolerance and understanding is crucial for young minds.

Time after time a book leaves me the most conflicted when it is overwhelmingly cute, but the message is not necessarily a positive one.

Life is not black and white; if anything our reality is as subjective as it can be, but how do you teach that moral grey area to a young child without getting mired down?

So the plot of Secret Pizza Party is that Raccoon is sick and tired of being beaten and shooed away from the pizza restaurant (because, you know, he’s a raccoon), so he decides to order a pizza and pose as a human and then steal it, but then he feels lonely and wishes he could share the joy of pizza with his fellow townspeople. It’s an overwhelmingly cute book. Rubin and Salmieri have other successfully charming food-themed books like Dragons Love Tacos, but Secret Pizza Party still leaves me feeling squirrely after a read. I certainly know that stealing is wrong–even if it is for pizza–but how do I explain that to my son when the protagonist of this book is so darn cute? Plus, aren’t raccoons naturally thieving? This is not the sort of discussion I’m ready to have, let alone feel comfortable enough to come down on a definite moral answer.

And now a read for nap time:

So this book has nothing to do with parenting, but it’s so awesome that I can’t not talk about it here. Plus, it’s a very slim book, which makes it perfect for reading during a child’s (sporadic) napping. It’s a surreal dream-scape of a novel which offers very few realistic details to grasp onto, but when you’re sleep deprived after sitting up with your little one’s late-night tummy trouble a little weirdness is welcome. Muntz’s descriptions of the quiet moments and displays of love are some of his most poignant:

“Do you want to go somewhere?”

We were lying in a bed, parked in a parking lot, outside either a school or a church, I wasn’t sure which. Green lights wound through the air. We were surrounded by cars, but no one passed on the road. There was nowhere to go.

She tickled me. I kissed her nose.

“I love you the way a cup loves water,” she said.

Although it’s fascinating to me how I have no compunction reading a novel with an old man who eats children, teeth grinding, but I can’t bear to read my son a book about a pesky, thieving raccoon. At the end of the day, though, I’ve already learned what’s fantasy and what’s reality; I can tell what’s a dreamlike realm and he can’t, so it’s my job to educate his morality. I have to teach him etiquette because, as a wise 10-year-old told me, our whole society is framed around it.

Bruce Wayne is the Alter Ego, Not Batman

Giant Monsters: All I Need

MOUTH: EATS COLOR and the Devoration of Languages

The Bell Tolls for No One by Charles Bukowski