Website
Submission Guidelines: “We ask that submissions be between 10 and 30 pages, and sent to saucepotpublishing@gmail.com.”

How did Saucepot Publishing start?

Late last summer, my best friend Birtu Belete and I (hi, I’m Megan Lent) had two stunning realizations. The first one was that we were aching to do something creative and productive with our time beyond dancing in our underwear to Stevie Nicks in our apartment. The second was that we really loved small press chapbooks, but felt that there really was a niche that needed filling: tiny hand-assembled books featuring funny-but-poignant work, largely by people who aren’t cisgender, heterosexual, white men. We also are prone to making impulsive decisions, and at least “let’s start a small press” is a pretty positive one.

The name comes from this time we were at a comedy club in matching pink wigs and this guy on stage kept referring to us as the “saucepot twins.” We looked up the phrase on Urban Dictionary and apparently it means a “saucy sexpot,” but I tend to think of the cooking utensil a lot more, despite that.

Tell us a bit about Saucepot. What are your influences, your aesthetic, your mission?

With Saucepot, we pride ourselves on our dedication to featuring up-and-coming writers—while we have published (and will continue to publish) poets and authors more established in the small press scene, we also have really enjoyed bringing attention to majorly-talented but previously unpublished writers. It’s really cool to see someone who’s maybe never shared their writing publicly produce an amazing book that’s read by other people. We like to maintain a pretty unpredictable aesthetic; each of our chapbook covers features a wholly unique style, designed by many different artists. And, like I mentioned above, we really want to publish people of color, women, queer voices, etc. People who are often underrepresented in publishing. It was just getting so frustrating and exhausting to see so many presses featuring sooo many straight white men, you know? Mostly, we want to publish stuff that balances semi-humorous self-awareness with genuine, vulnerable emotion.

We’re very close to releasing three new titles—by Margaret Bashaar, Howie Good, and Alexus Erin—all of which contain these incredible poems that will really hit you in places you’ve never expected to be hit. There are poems about total destruction and feminism and dreaming of God and what it means to truly exist. (Imagine an avalanche, but as you’re falling down the snow you suddenly remember some funny line from a movie, but you can’t remember its title.) Our past books have included so many wonderful things, but I’ll point to Sara June Woods’ Don’t Smoke in Bed and Claire White’s The Odds specifically, because while Sara is pretty well known in the small-press universe, this is Claire’s first book, and that really represents what we’re all about. As for the future, I think we’re really into publishing a cookbook. Like, why not?

Small presses are maintaining this really comforting thing about reading, which is having books you can hold—despite how exciting so much of online publishing is, and how much Birtu and I love that stuff. Elsewhere in the small press universe, I am really, really into Metatron. I think that the books they’re bringing out are so unique and beautiful and heartfelt and surprising. Ashley Opheim’s I Am Here really blew my mind when I read it. Also Hyacinth Girl Press is doing amazing stuff. And Them is such a rad journal.

How do you cope? There’s been a lot of conversation lately about charging reading fees, printing costs, rising book costs, who should pay for what, etc. Do you have any opinions on this, and would you be willing to share any insights about the numbers at Saucepot Publishing?

Our books currently cost $8.50 a pop, with certain bundle deals, and I can’t really imagine charging more, but obviously don’t quote me on that. We started out with a successful Kickstarter campaign, which really got us going for the first year or so. Now we’re relying on book sales and innovation. I bought a laser printer recently that’s really helped with printing prices, and I’m kind of in love with it. Not as in love as I am with my long-reach stapler, but pretty close. I think that one way to deal with the price of printing is, obviously, to focus on ebooks, but there’s something so cool about physical books that Birtu and I can’t really get over. Also, we’ve consigned at bookstores before, and are going to continue to do that, which is a really neat way to go about getting exposure and making new sales. We are pretty collaborative too, working with really great artists for the covers, and Birtu’s mom has helped us with printing; so have these two just phenomenal guys at the Fed Ex in Downtown LA on Central and 2nd. I’m serious, if you’re ever in town and need something printed, go to them. Our Instagram has been cool for like “getting exposure” and also interacting with people who love lit; it’s @saucepotpublishing and includes a lot of photos of cats trying to read our little books.

We’ve interviewed a number of L.A. presses, but you’re the first we’ve asked about location. What does it mean to the press to be, as your website says, “based in Los Angeles and online”?

Since we publish people from all over, which I’m so happy is how most small presses are shifting, there’s definitely an element to Saucepot that is very entwined with the internet. It’s how we communicate with writers and the main way we get folks to see just how saucy we are. (And we are quite saucy.) And being based in Los Angeles means that we’re slightly separate from the majority of small presses, which are largely East Coast-based. So, we have been able to create our own aesthetic—something a little more laid-back, with a vibe closer to, “this is something we’re passionate about that’s also fun as hell,” and less, “this is a very serious business that can only publish from a certain list of writers or we’ll lose all our precious cool factor.” We’re not super obsessed with being perceived as anything other than two Stevie Nicks-wannabes who also like to read good stuff. 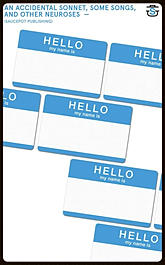 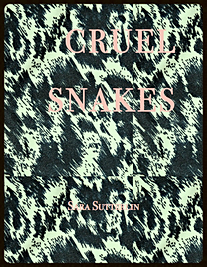 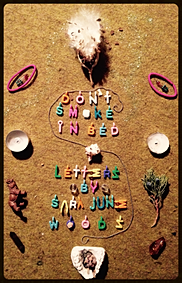 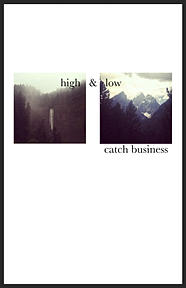 Their Days Are Numbered XLIII

The Bell Tolls for No One by Charles Bukowski