Image Credit: Pixelchaos via cartooncliparts.com
For many co-sleeping households, the transition from family bed to crib can be fraught with tears and tantrums, and my house is no stranger to those. As my wife and I try to ready our one year old and attempt to establish a bedtime routine, there are, of course, challenges and a give take/relationship. My son has a wicked case of fomo, so the best way to deal with bedtime is to lay down with him in our bed after story time and jammies and let him think that we’re all going to bed and then transfer him to his crib later. Otherwise he screams and cries and gnashes his five teeth.

Lately, while lying next to me in the dark, my son insists on tugging my ear instead of his own, digging his tiny nails into my cartilage, fishing those thin fingers into my ear canal. As any parent will attest, sometimes it’s best to just go with it.

But after he’s sound asleep in his crib, the tugging sensation lingers.

Live every day of October haunted.

so in the spirit of the season (and because I’m typing this late at night), here are some books that are haunting–reads that feel like a fingernail into the ear days after they’re read. 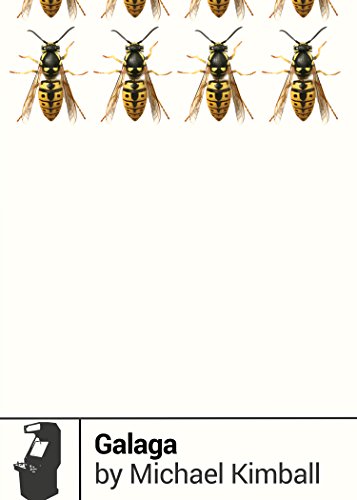 Abuse is a troubling, yet very real occurrence that is hard to read about, let alone discuss, but Kimball’s autobiographical account of the abuse he received from his father and older brother and the escape that games such as Galaga provided him is as essential as it is stirring. The simple concept of a book on Galaga being a survival story is proof positive that video game criticism can be so much more than navel gazing about ones and zeros. Speaking of video game criticism, the entire first season of Boss Fight Books have truly raised the bar. Like Michael Kimball’s Galaga, the best parts of game programmer Anna Anthropy’s ZZT are her personal accounts of growing up as a trans woman and the respite and conflict that internet communities and the indie gaming community provided her: “When all you are is a string of text, it’s easy to control how others perceive you.” It’s not limited to autobiography, however. The book is also a guided tour through the proto-indie gamer world, a treatise on independent living and the infantilizatiuon of American consumers, and most startling, a dissection of troll culture:

In high school, you’re surrounded by that shit. You see popularity and exclusion used as tools to gain status. You see race, economic status, homophobia, and transphobia used to control people. Any teenage boy (or anyone who thinks of themselves as a boy becasue a better option hasn’t presented itself yet) is aware of the power homophobia has.

You’re handed this community that lives in your computer, almost like a laboratory experiment. It’s safe. You can turn it off at any time. No one knows your real name, You type words–people react to them. Maybe they get mad, maybe they get hurt. Are you not going to try out the social tools you see your offline peers using against you?

This book caught me off guard. I received it, intending to feature it in my post on comic books for children, but it didn’t quite fit. It’s still a comic book, and it’s still very well-suited for young readers, but the story of the Shark King is so much more. For those unfamiliar, the tale is of a young couple who fall in love, and like many young couples in love, they have a son. Once the son is born, the father disappears and the mother is left to raise their child alone. We come to realize that this son is different from the other children in the village. He is an astute swimmer and he has a shark mouth in his back. The story is good fun until the ending–a regular angry mob chasing the freak number. So here’s what’s so haunting about this book. It ends with the son being chased out into the ocean and the mother all alone, knowing both her son and lover care for her, but being alone nonetheless. I’m still befuddled by this ending months after reading it. What kind of ending is that?

Player Responsibility in The Walking Dead