I read a lot of comics in 2013—well, I read a lot of comics every year. Unfortunately my taste in comics is less than mainstream. As a kid I eschewed the cape and mask comics from Marvel and DC, preferring Dark Horse’s Alien and The Terminator comics. Now I prefer serious, realistic offerings from more independent publishers like Drawn and Quarterly, Top Shelf Productions, and Fantagraphics. As a result of my obscure taste, the few of my friends that do read comics have an even harder time talking to me about the books I’ve been reading because they can’t find them (or more often they don’t have the money to buy them all).

A great example of this is Jesse Reklaw’s Couch Tag, which is probably the best book of 2013 that you haven’t heard about. The book had a late fourth quarter release date and it’s from an independent press on top of that, but the sheer pathos of Reklaw’s graphic memoir is flooring.

The graphic memoir is both funny and heartrending as it uses several different metaphysical conceits to organize the memories—the thirteen cats the author had as a child, all of the toys he played with, a deck of cards—of Jesse Reklaw’s life in the strongest portions of the book. On the surface, Reklaw’s seems like a normal childhood in the 70’s, but it is in the corners where the reality seeps in and where the real emotional weight of the book rings true. 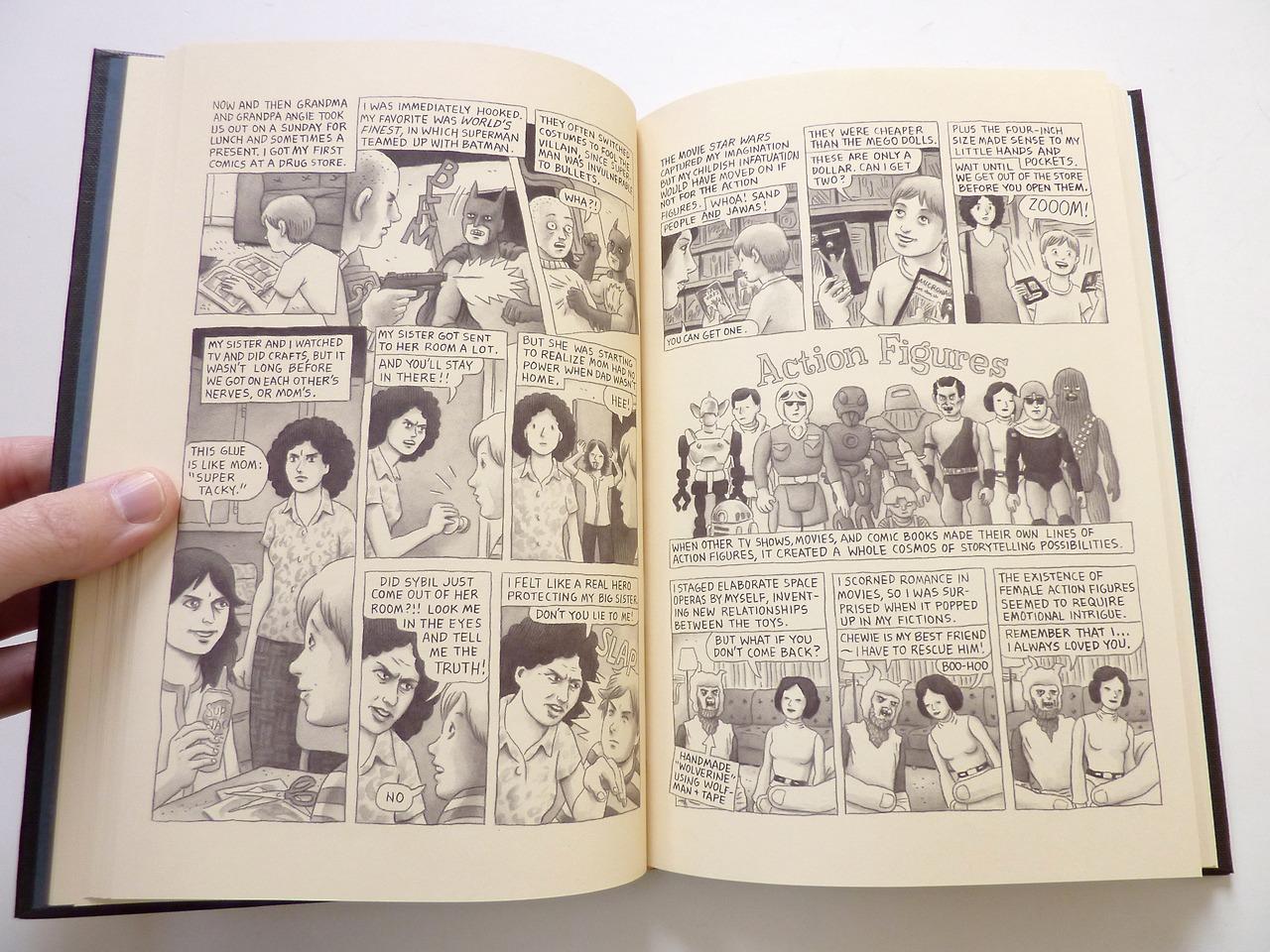 Jesse Reklaw’s parents’ marriage is fraught with turmoil and substance abuse; his father—who insists on being called “Hogboy” by his own son—is a bearded, angry man prone to outburst. There is sexual abuse on the fringes of Reklaw’s childhood, also as revealed later in the collection. Even though the focus of many of the strips is on the toys or card games and innocent memories that these represent, it is in the backgrounds, the peripherals of the panels, and the expressions on adults’ faces that Reklaw’s art reveals vastly different circumstances. With Reklaw’s hindsight we are encouraged to see the memories for what they really are.

Jesse Reklaw’s artistic style further reminds us to look closer at what’s really going on in these memories. Using a penciled style that bounces between early R. Crumb and the art of Ed Piskor, Reklaw’s style encourages his audience to look closely.

Look at Jesse’s father’s eyes in this panel or the rapid shift in his sister’s face from the early panels to when they get in trouble: 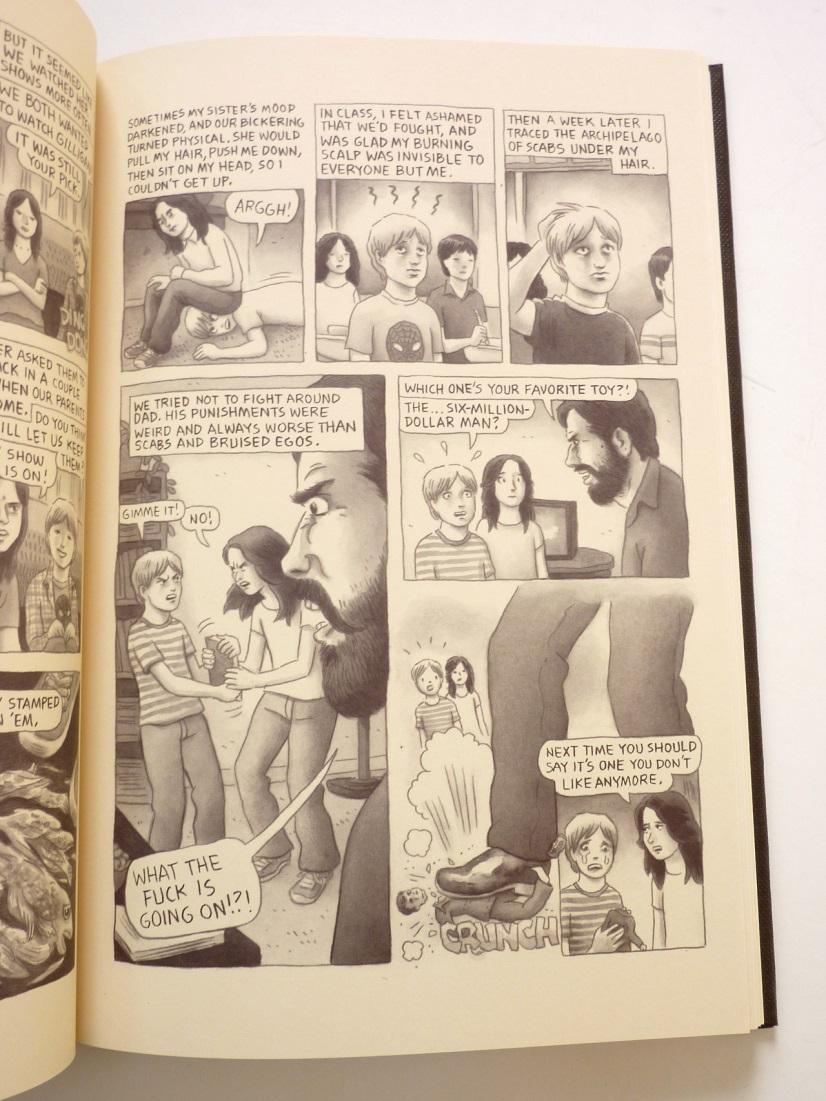 The pain and anger of the eyes of all involved add such significant dimension when coupled with his text on the page.

Reklaw’s work cuts deep as it reminds us that the darkest elements of humanity can be found in our own backyards, but it also reminds us that through that darkness we can persevere, somewhat damaged, through art and expression. In “The Fred Robinson Story,” Reklaw and his friend Brendan navigate the post-high school malaise by creating comics, recording surreal music, and painting Batman graffiti. “I’m always interested in your work,” Brendan writes to Reklaw in a letter from Norway (reproduced in the book). “I believe you of all people have a chance to succeed.” Brendan continues by saying, “Life here in Norway becomes dreary and mundane even amidst all the new and exciting things, [sic] at least until I write you a letter and remember that I can be creative again.” It’s this creative force that keeps their friendship strong and gives them purpose well into their thirties.

Couch Tag may not have received the attention that it was due upon its release, but it is still a strong and impactful first long-form work by the artist, one that earns him a slot on the comix shelf right next to American Splendor, the works of Jim Woodring, and even Allison Bechdel’s graphic memoirs. Jesse Reklaw admits that his memories seem “like a made-up dream, a forced metaphor about family and love and anxiety. But I guess that’s how a kids’ minds [sic] work,” but these comic strips reflect upon a familiar, bruised place in us all. Give it a read, will you?

THE HAUNTED HOUSE: WEEK TWO “The trace (of the book,) left in life by an enigmatic experience,” Part 2

An Erotics of Seeing by Doug Rice

Perceived Realities: A Review of M-Theory by Tiffany Cates